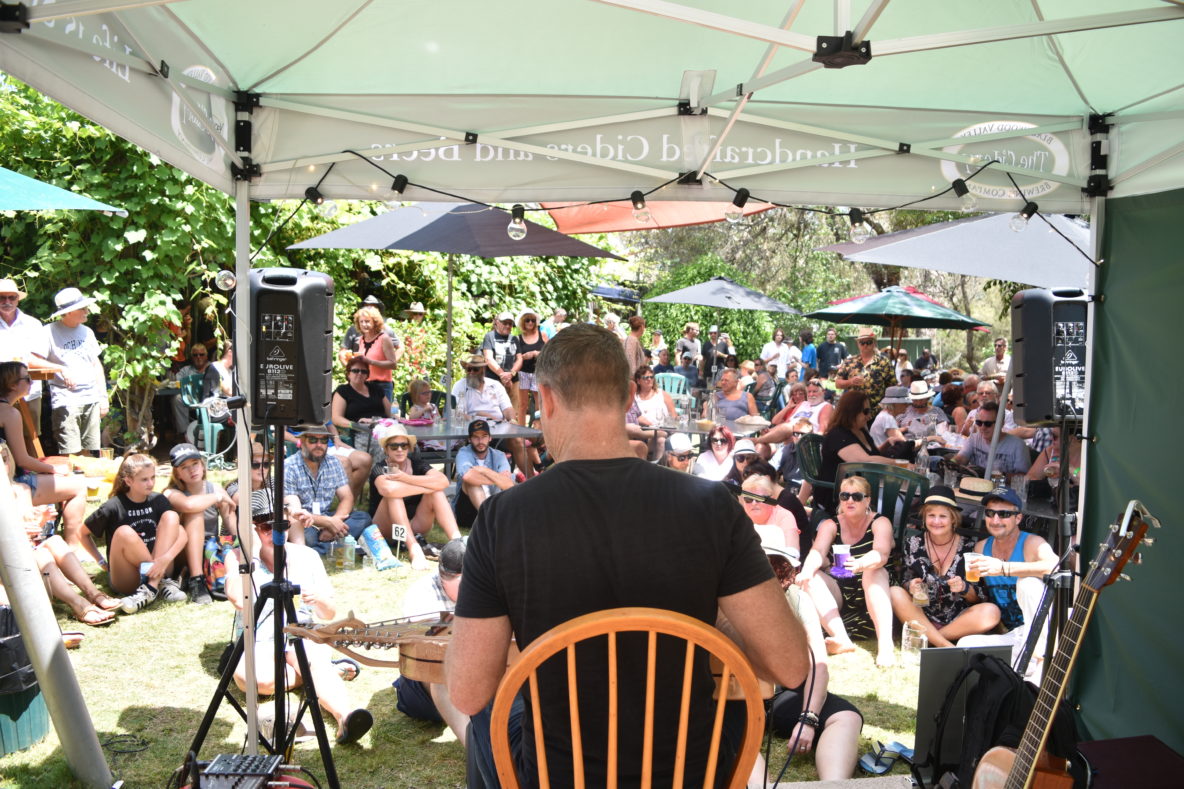 In search of new homegrown music, our friends attended the 25th Blues At Bridgetown festival, here’s what happened…

Phwoar. It’s taken almost three weeks to recover from one of the most organic, fun-filled art and music festivals Western Australia has to offer. Celebrating its 25th anniversary, The Blues at Bridgetown has become a must-attend for lovers of Blues, Roots and Rock & Roll music. Its easy to see why… (Scroll down to check out the free embedded Spotify player below) 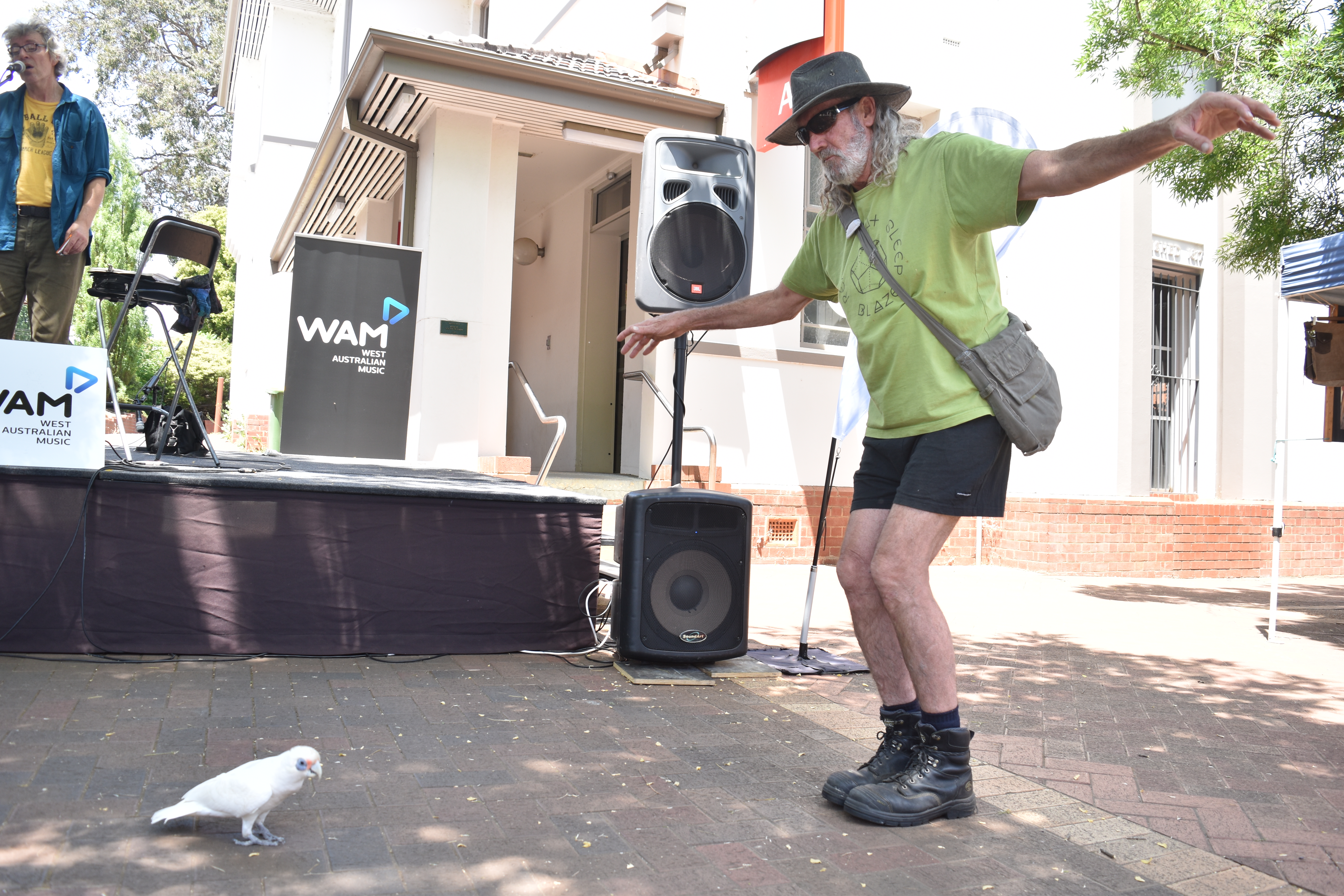 Just a man and his pet ‘cocky’

The Blues at Bridgetown (B@B) is set in the picturesque South-West region of Western Australia, nestled between the rolling hills of Bridgetown alongside the Blackwood River. The froffys are cold, the locals are friendly and the jams pump ‘neath a star-filled sky on this weekend of art and music. Before going any further, a huge thank you to the event organisers, volunteer ‘blue shirts’, and the locals of Bridgetown. Cheers to many more festivals! 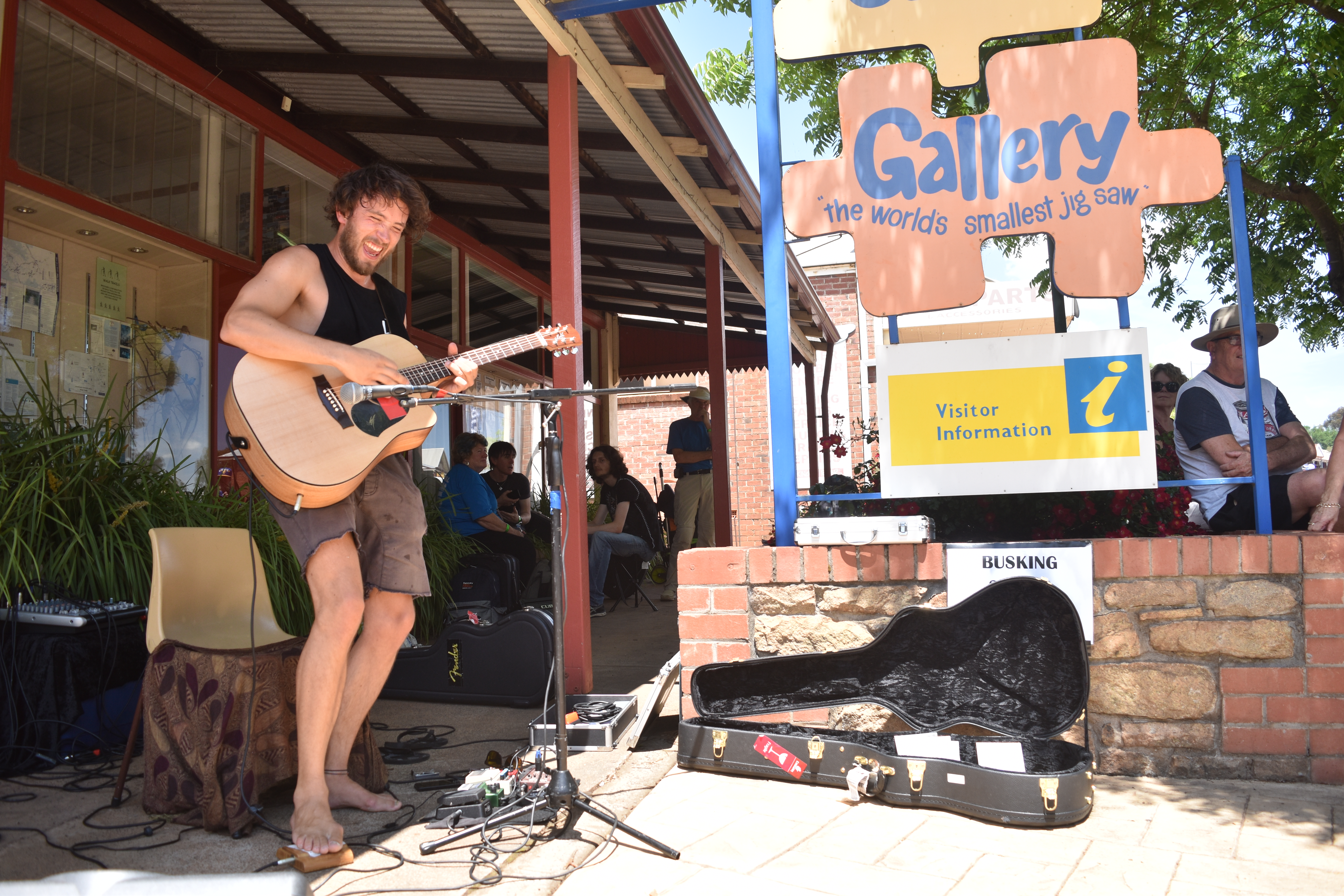 Have a gander at our new Spotify playlist below which features most of the musicians. Give us a follow on Spotify and Soundcloud to keep up to date with our musical movements.

Sailing La Vagabonde  was lucky to have a good friend of ours attend the B@B, soaking up the chilled atmosphere and chatting with some awesome musicians (Shout out to Bob!) Needless to say, we can’t wait for next year! On with the show.. 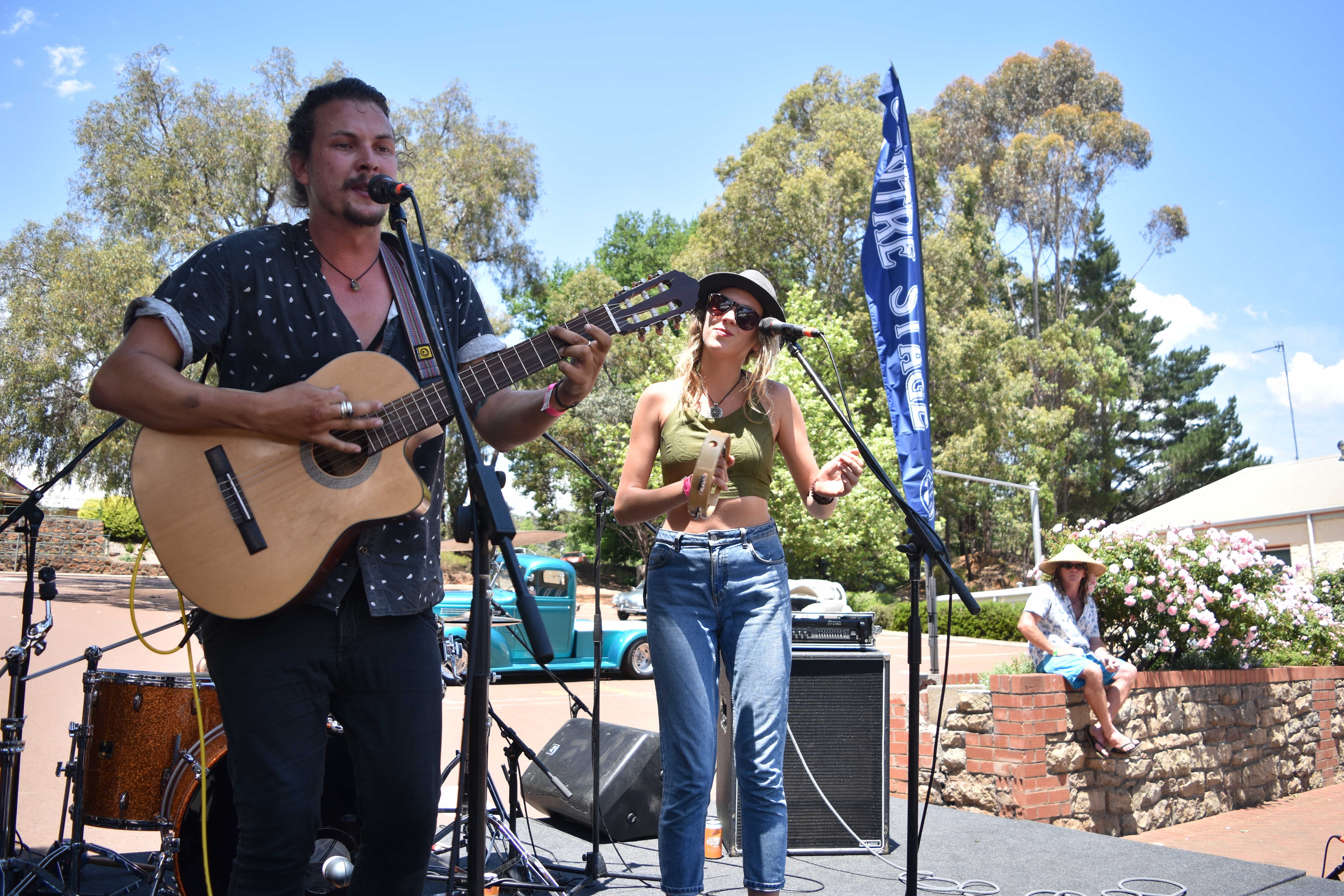 Dan Howls is a performer who lets nothing get in the way of his act, not even broken guitar strings. His music is a bit like walking into a Western Australian country pub; locals at the bar, dogs wandering the floors while ice cold beverages are poured to escape the blistering heat. Mesmerising and grimy, Mr. Howls snapped a string while playing his set, only to simultaneously restring his guitar and continue singing like a true showman. 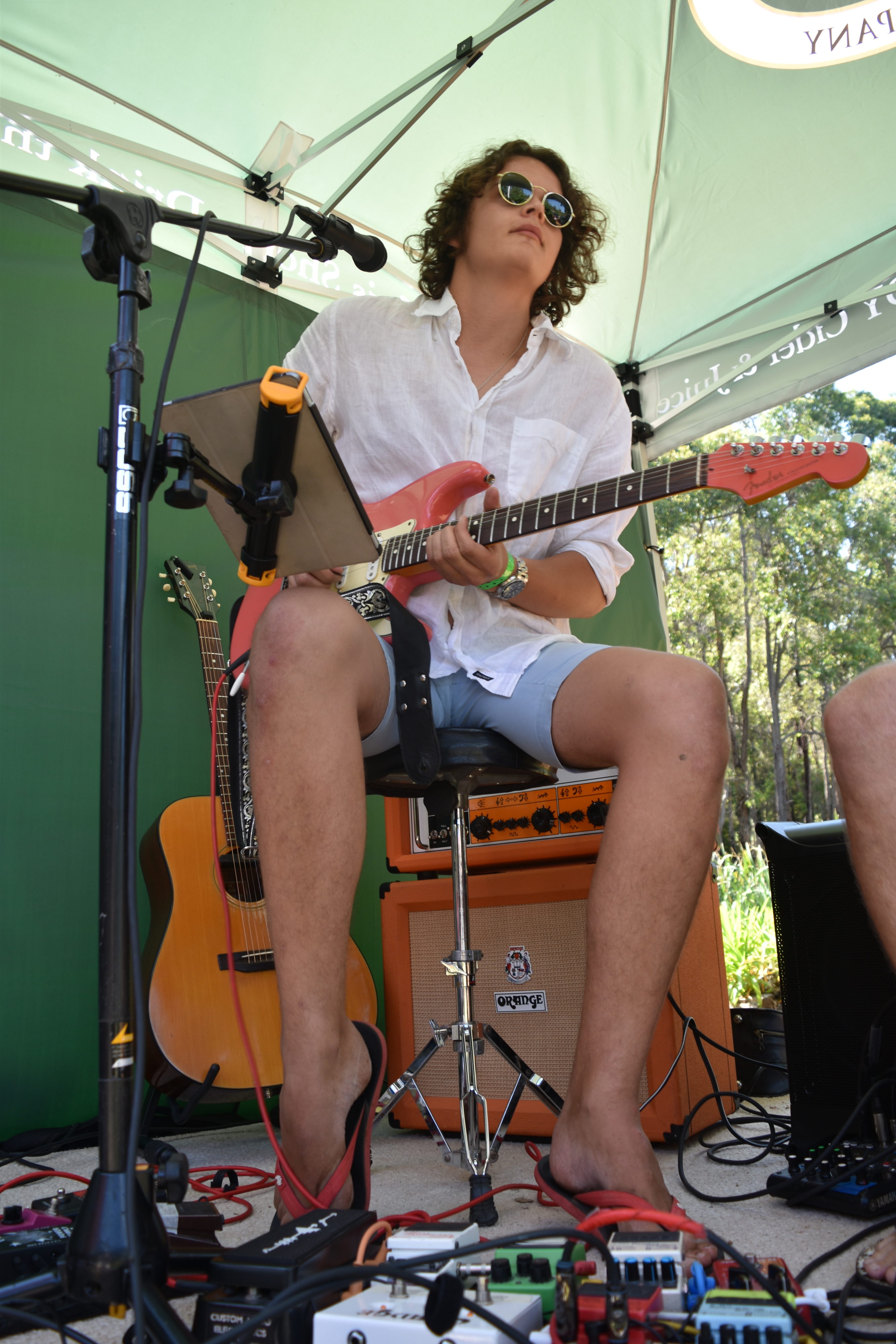 Looking like a young John Meyer, rocking like a prodigy of Hendrix, Zack Linton certainly left his mark on Bridgetown. His laid back style and appearance contradicting his musical chops, as he weaves his way through intricate guitar solos with ease. With a pedal board as long as your arm, he knows how to make that pink Fender strat sing like a mannequin possessed. 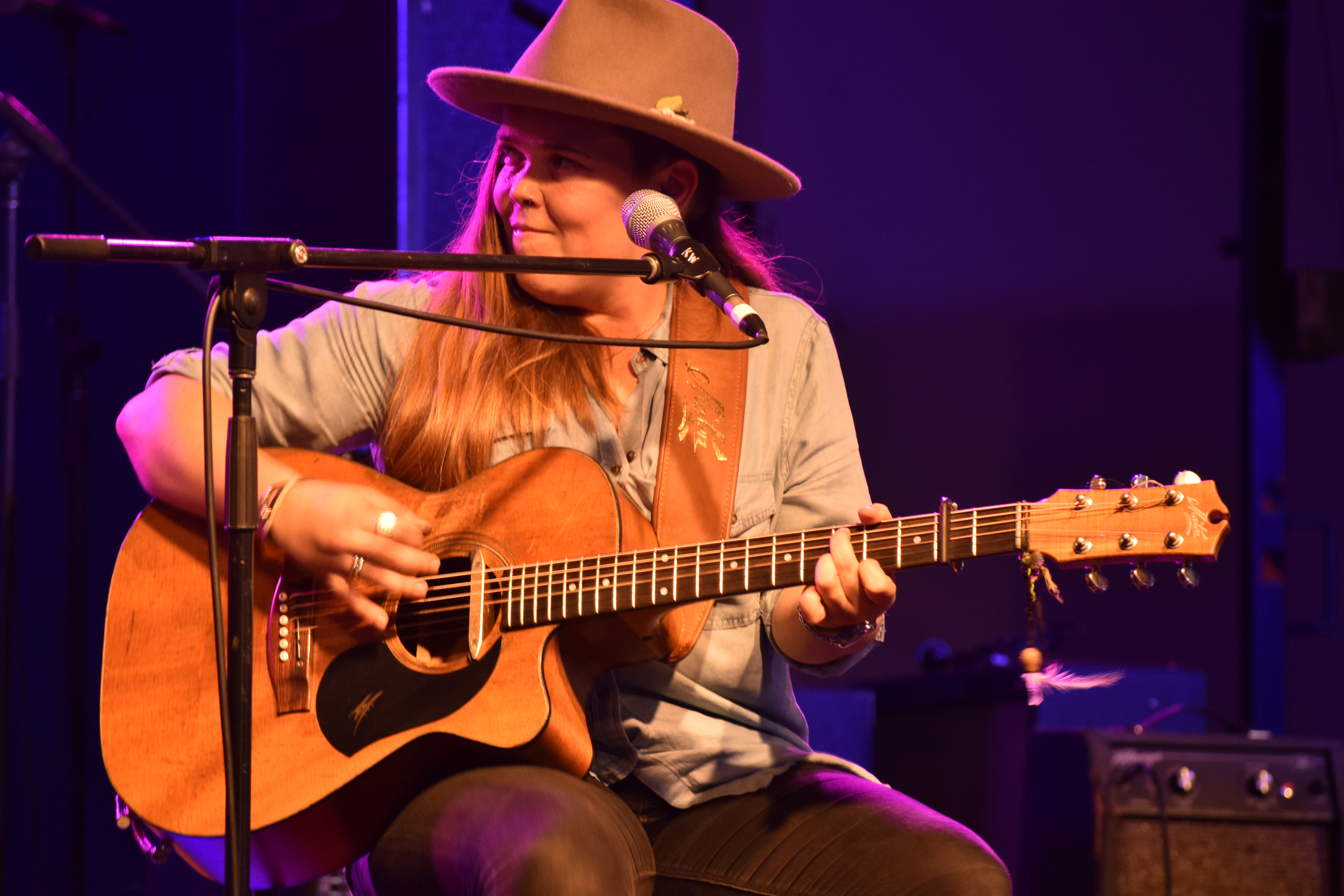 Blues at Bridgetown favourite Minnie Marks knows her way around a guitar neck. Playing a “dirty-sweet” style of blues rock n roll, she gives her all in every performance and pushes her own boundaries to the limits. Her B@B performances were memorable as she tore her guitar a new one, alongside her backup harmonica and violin players. Minnie is quickly becoming a solid addition to festivals all over WA and Australia. 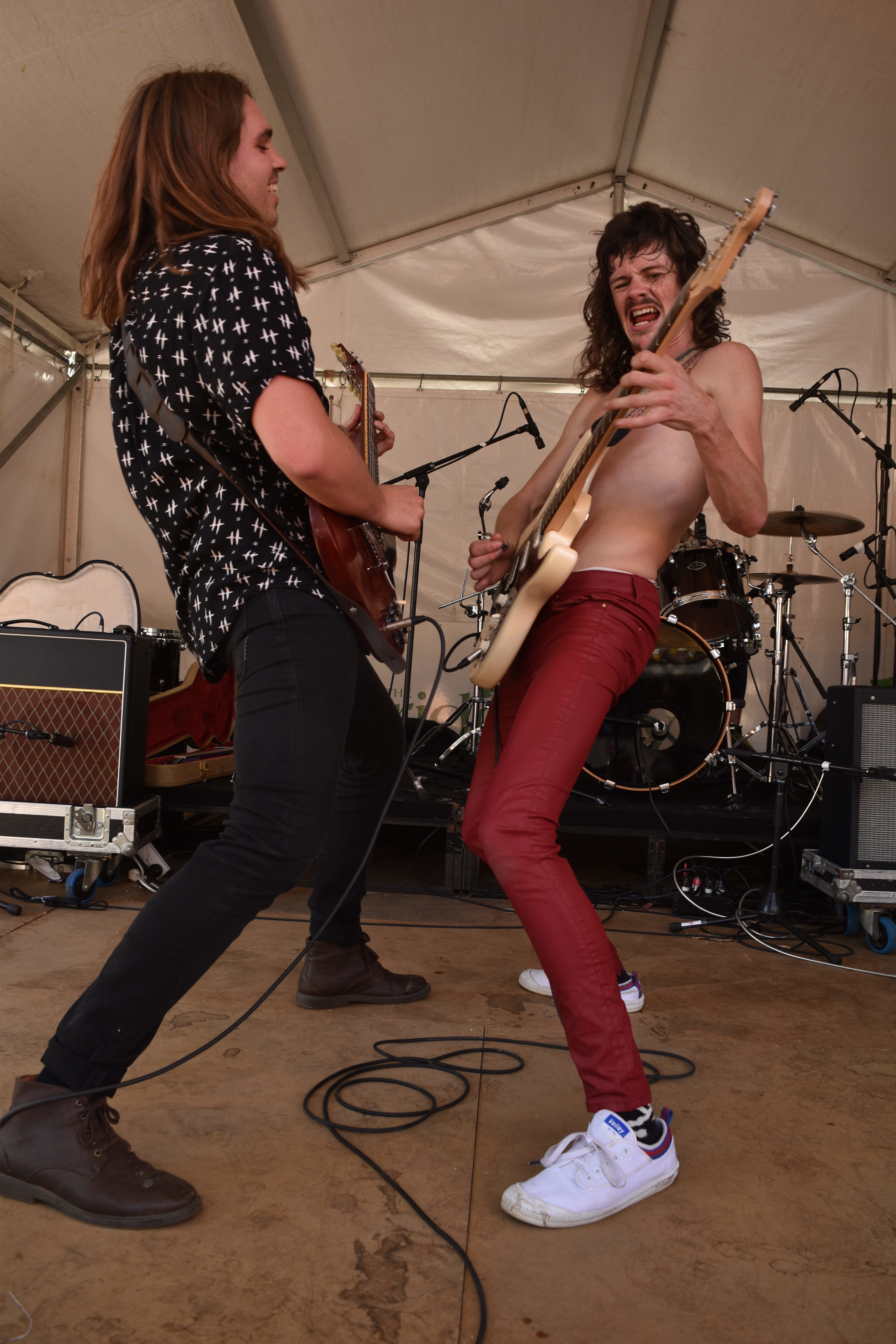 The Southern River Band should be seen to be believed, B@B is possibly the first time ‘family friendly entertainment’ has been uttered in the same breath as TSRB. Think the opposite. Think tight Lycra pants, insane harmonised guitar solos, hard liquor straight from the bottle, explitive on-stage banter and massive choruses. I guess it depends on your idea of family. Frontman Cal has worked obsessively to create a presence that will be burned into your memory, and by the way, don’t serve him ham sandwiches while he is spitting lava-hot comedic vitriol at the audience (that actually happened). 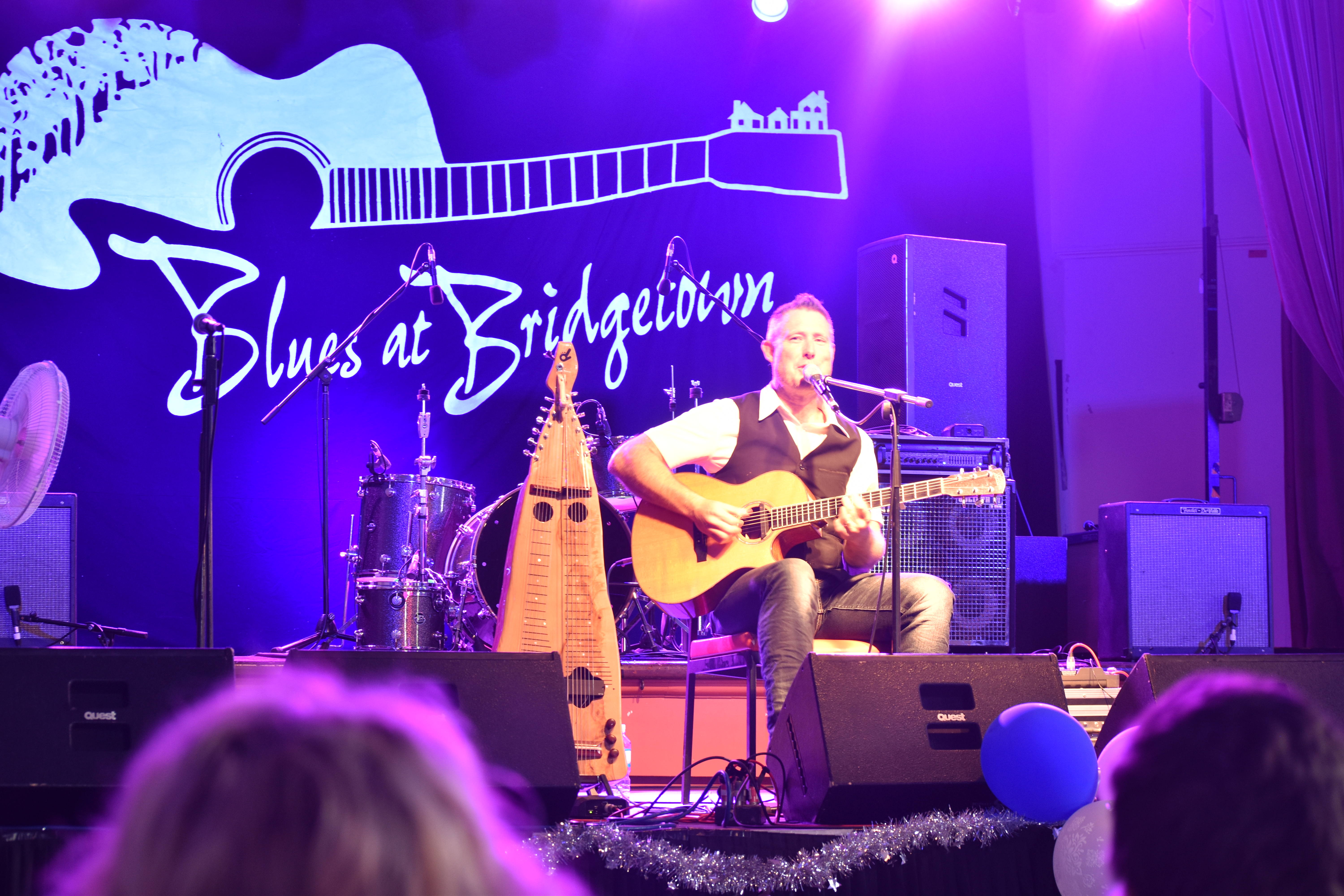 Andrew Winton is a wizard of stringed instruments and the veteran of 10 B@B’s manages to garner new followers wherever he goes, while keeping his cult-like fans happy. Switching between a standard six-string guitar and his 13 stringed double-neck lap-slide beast ‘The Lucky 13’, Winton keeps the wheels of music in motion. His awesome on stage presence, strong banter and of course his guitar and singing wizardry keeps the pavilions packed with fans young and old. 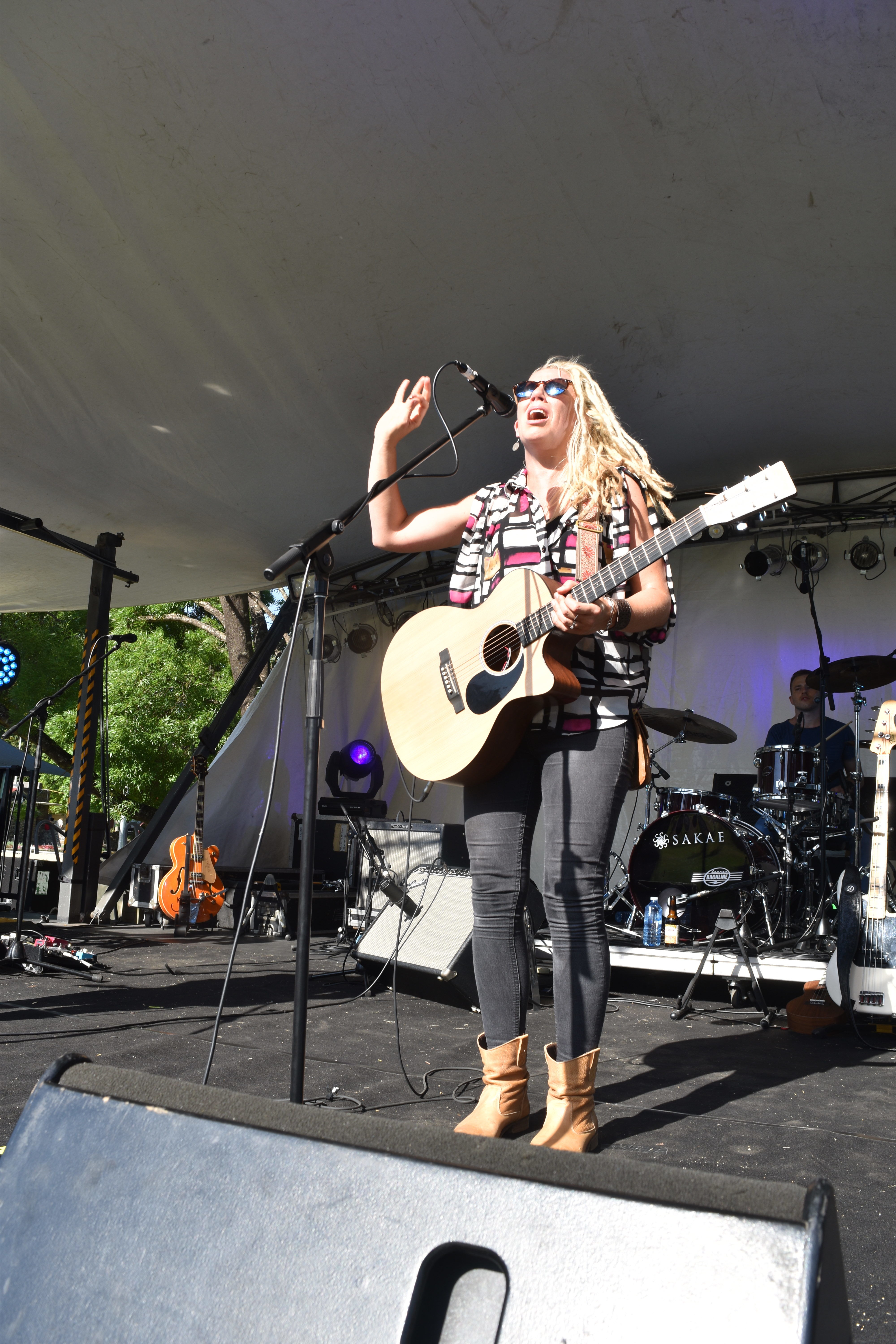 Songstress Toby pulls no musical punches, using the platform to promote strong values and messages of hopeful equality. The beautiful diva rocks dreadlocks and a side shave, at the helm of a band that gels together like peaches and cream. Originally a Perth local, Ms. Beard has travelled extensively and honed her craft well. So well that the punters at Toby’s 10th B@B rushed the stage to dance their blues away. 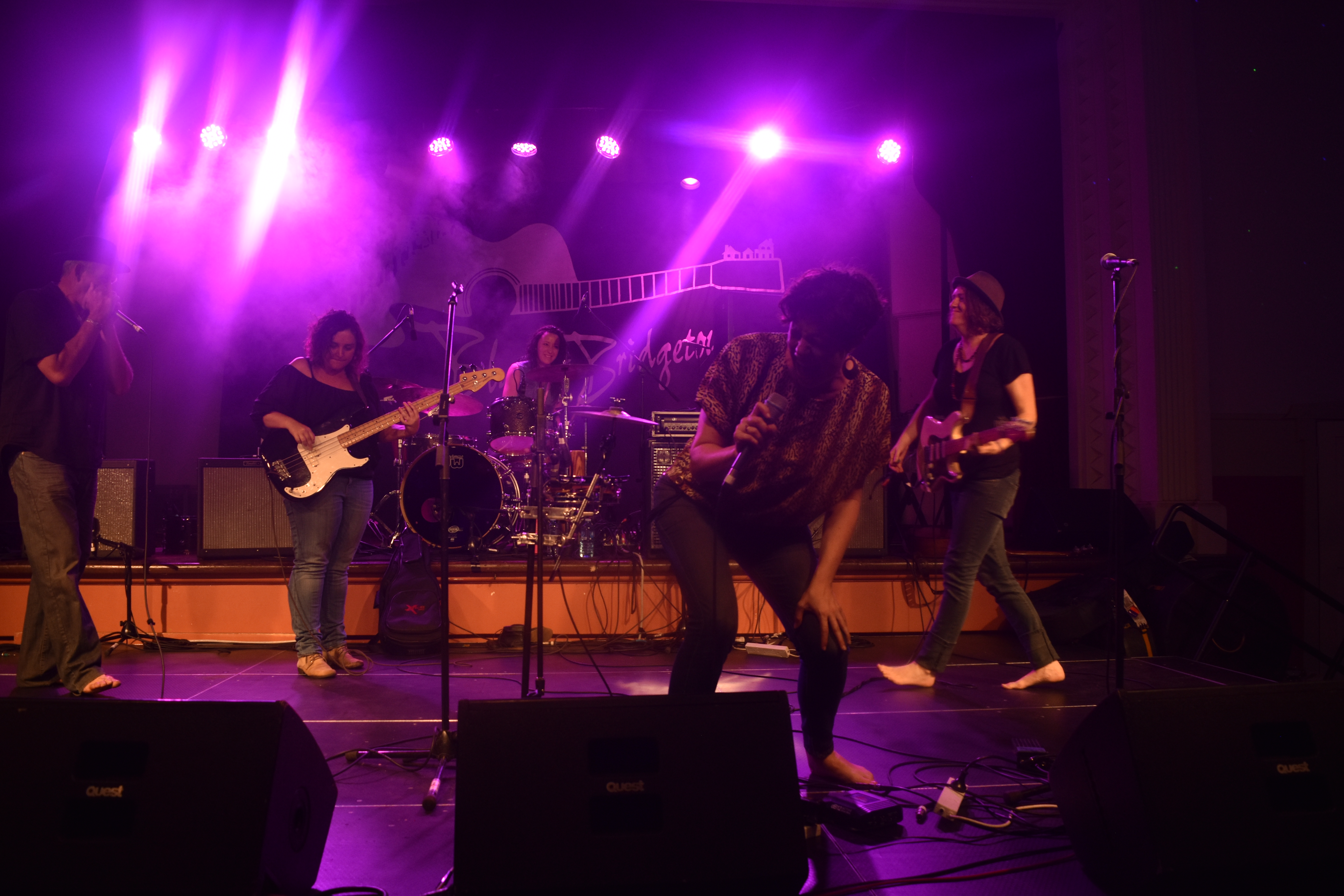 Hussy Hicks put on a performance we wont forget any time soon, featuring epic guitar solos and soaring, emotive vocals. Midway through their set, lead guitarist Julz Parker jumped off stage, borrowed a skateboard from a surprised punter and skated through the crowd and out the back! Lead singer Leesa Gentz continued crushing it on stage, hitting the high notes while getting down low, her sapphire blue eyes  connecting the dots with a captivated audience. 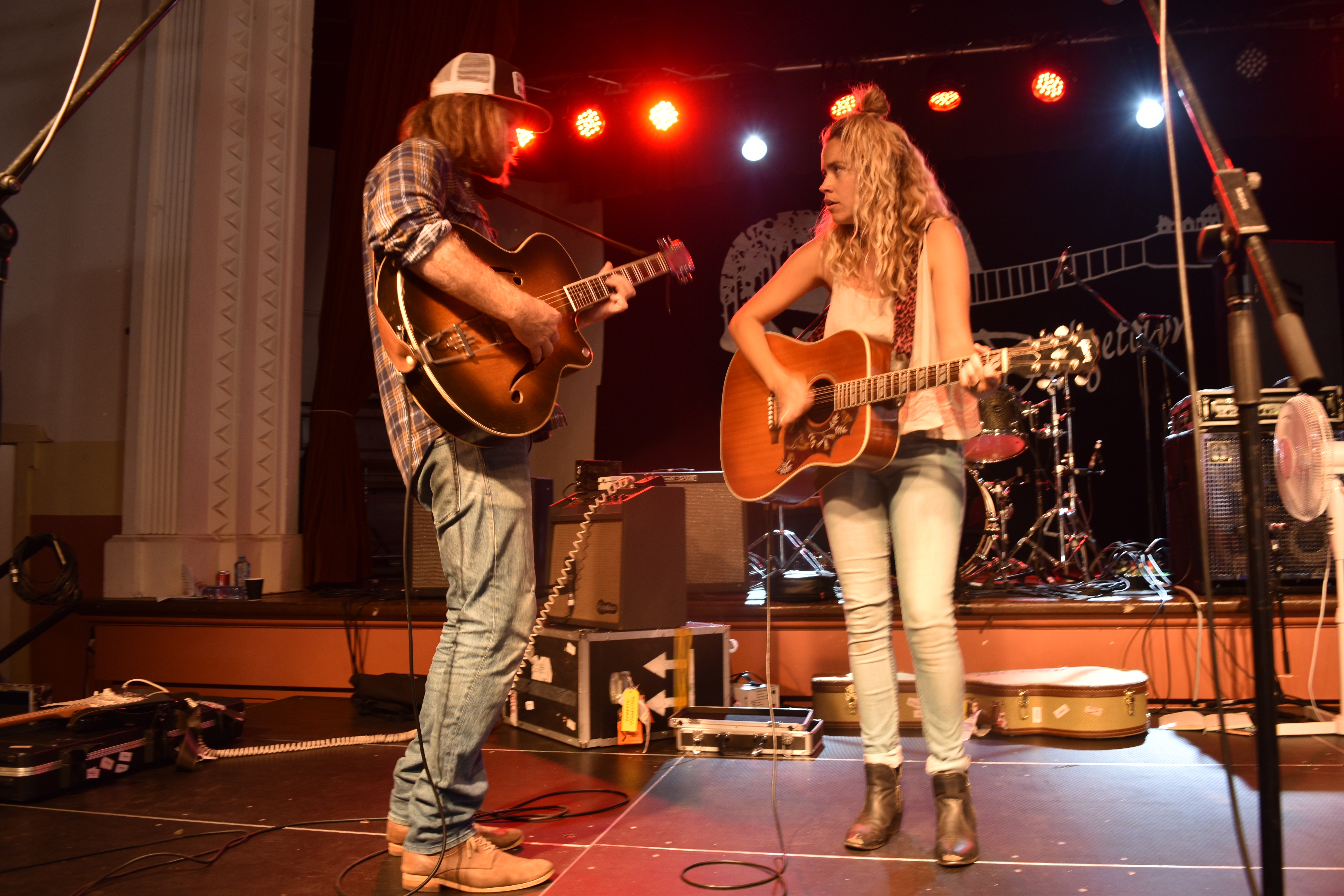 Talented individuals Ashleigh Mannix and Justin Carter are two of the nicest humans you’ll ever meet. They combine their musical sensabilities to alchemise folk-blues rock act Little Georgia. Ash writes music that tells a story, her passion oozes out through her performance, while Justin compliments and dances through melodies effortlessly. Beautiful vocal harmonies intertwine and the chemistry between the long time friends is refreshing. The touring duo received a standing ovation and encore-call in a brilliant moment on the last day of B@B, remaining humble while swimming in local praise. 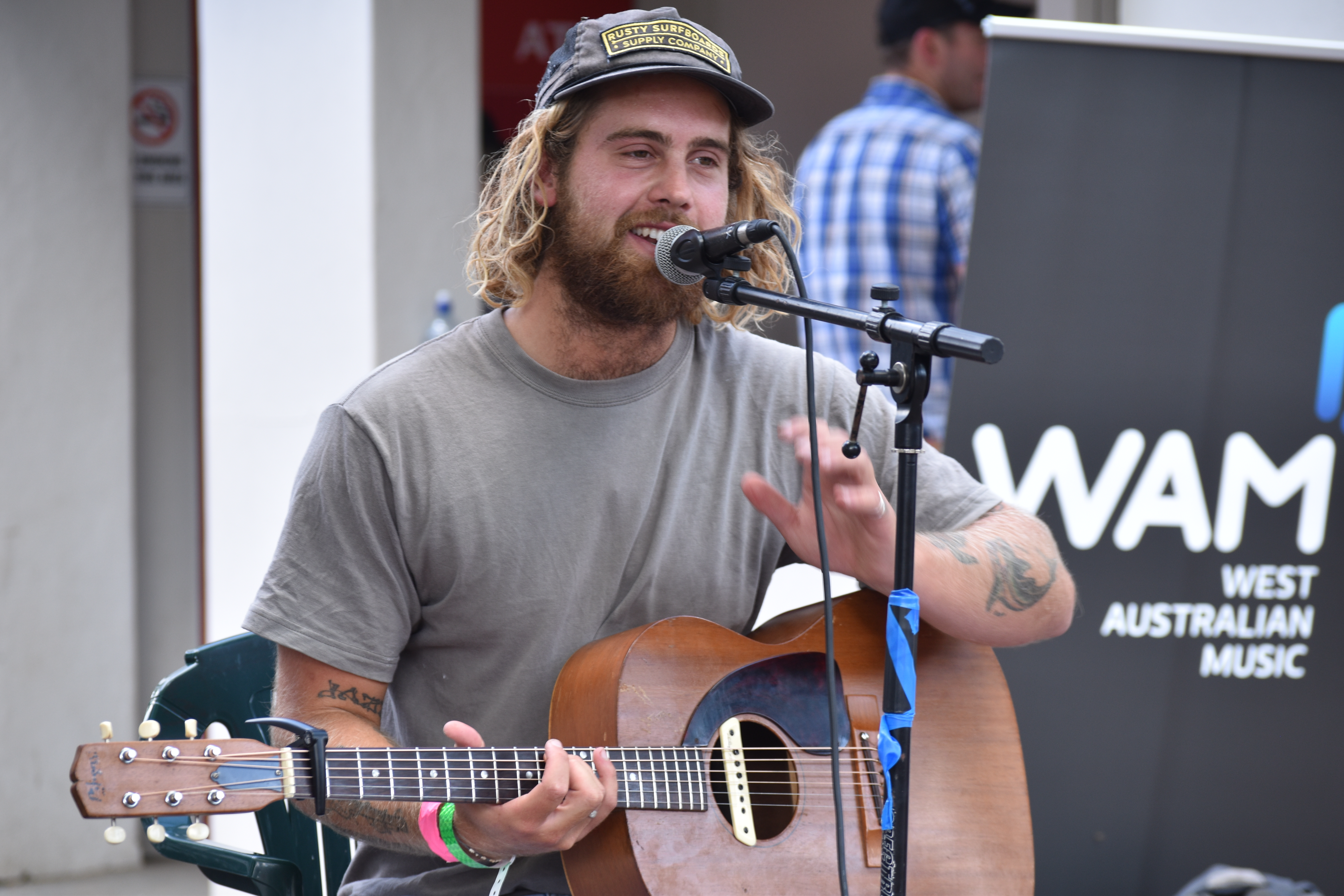 Gentleman Michael Triscari writes music describing his love and fascination for the ocean. Taking a minimalist approach, ‘Tricky’ performed as a one-man-band with his guitar, some pedals and a stomp-box under a rug. While he makes it look easy, his original songs are complex and intricate, sharing lyrics based on personal experience. Michael details memories of times spent at the Abrolhos Islands, located off the coast of Western Australia, “I love to walk on the reef bare-foot and see all the creatures below”. Be sure to catch the waterman on tour around Australia. 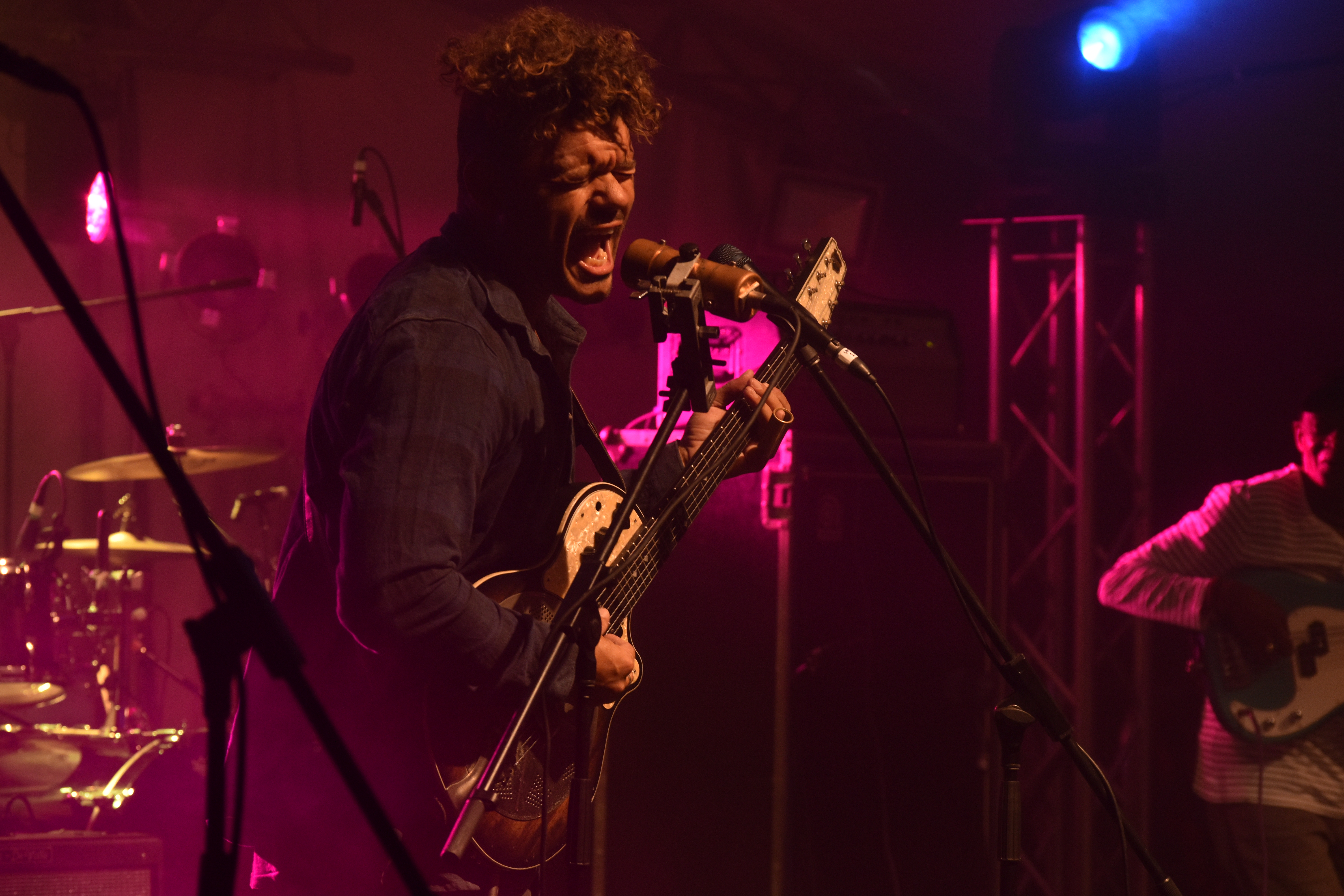 Ash Grunwald brought the house down as usual. Casual, barefoot and fresh from a surf at Yallingup, he had the crowd moving and shaking, feeling the love. Mr. Grunwald has a natural ability to set a party tone at his gigs, and B@B was no exception. Crowd surfers and shoulder riders danced into the night and Ash’s band were feeding off the live energy, pumping out fun jams for anyone and everyone.

That’s a wrap Vagabonds! If you love blues, roots, rock n roll, folk and interesting fusions of all of the above, the Blues At Bridgetown should be added to your bucket list. Mark the 1st weekend of November in your calendar friends and we hope to see you next year. Huge thanks to everyone involved, the musicians, organisers and volunteers in particular, you made this an unforgettable event.

Keep your ear to the ground…